Concept to Cover – How Great Art Gets on Your Book

They say you can’t judge a book by its cover, but every last one of us does it. That’s why the cover is there, and it’s why a great cover is so important. It’s your first chance to make an impression on potential readers, convey the uniqueness of your work, and establish expectations – so you’d better get it right!

Here’s how I did it, and at the end I’ll list some advice based on my experience and the learning curve I encountered.

For my the cover of my first book, I knew I needed to make a statement. When writing cross-genre fiction it can be tricky to nail down your readership, so I wanted something to catch the imagination and instantly show readers if this was the book for them. A snarling monster, and a gunslinger on horseback – pistol raised and face obscured as he faces the looming threat – would do nicely.

As you can see from my concept sketch below, I had a pretty good idea what I wanted already in my head, but was a long, long way from the finished product I needed.

“When making this cover, I had a few ideas in mind. This was the first time I’ve really done anything with this level of thought and detail behind it, so I wanted to make the cover an unforgettable one,” Cammi explained later. “Therefore, I decided to go with the pose that ended up in the final version because I believe it to be the most eye catching and hold the most dynamic action. The werewolf is front and center, more lit up making its face the focal point to instill a sort of uneasiness in the viewer. To which their eyes will inevitably fall upon the cowboy on his horse, aiming his gun at the aggressor. All in all, this was an extremely fun project to work on and I couldn’t be happier with how it turned out!”

Cammi and I communicated back and forth via the internet for several weeks while she crafted the cover, consulted with me, and made adjustments. With email, online image hosting, and electronic payment methods, we never had to meet in person as we collaborated to give me the best cover possible. The internet is awesome.

Once I was happy with the artwork, it was just a matter of transferring Cammi’s payment and having her sign and send the necessary releases allowing me to own and use the artwork. I won’t get into specifics about release types and payment amounts, because we’re free market capitalists around here and whatever you’re willing to pay and your artist is willing to accept are strictly between the two of you. (And also, if demand for Cammi’s work increases and she has to raise her rates, I don’t want all you heathens to come yell at me about it when she charges you more than me.)

As far as I’m concerned, her work was worth every penny. 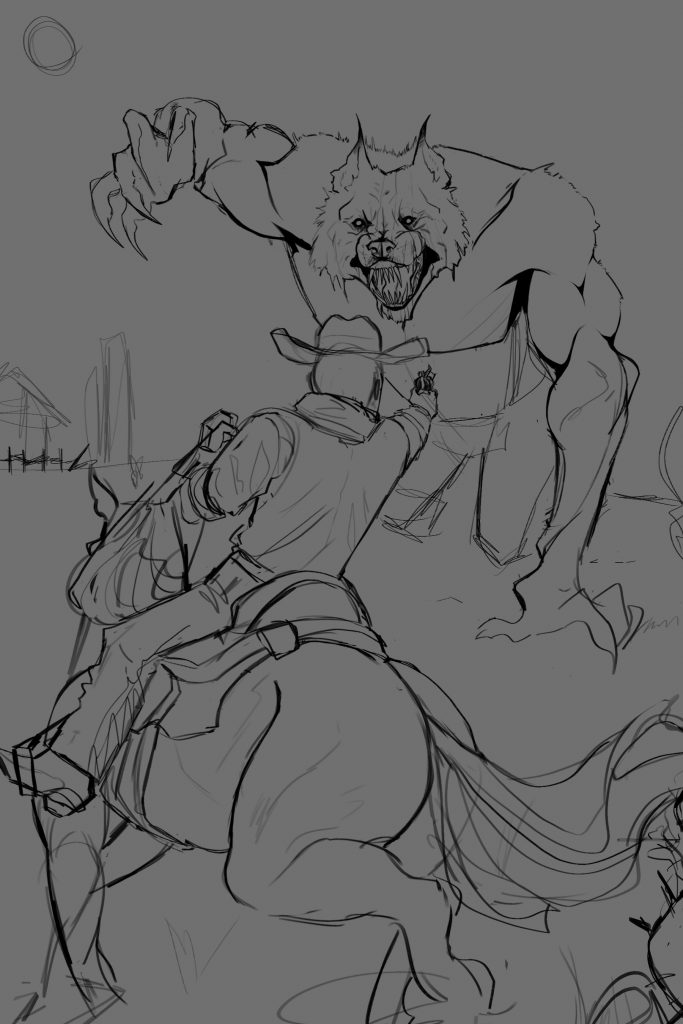 This is one of the preliminary sketches Cammi sent me while we collaborated on the artwork. Already you can see the elements of my original idea being expanded on and brought to life with the artist’s own vision for the piece. A good artist will always work with you to make sure you get what you want, while also bringing their unique perspective to the project.

Once I had the artwork, the ball was in my court again and the next issue was adding the title and any other cover text. Cammi created my artwork with space for text in mind, so I didn’t have to worry about that. Amazon has a tool called Cover Creator to help you with this, and I strongly recommend it if your primary market will be Amazon, because it can reveal any viewing issues with the title and bylines.

For example, in the pictures below you can see my first attempt at titling my cover art. I decided to go with a blood red text color to evoke and magnify the horror elements of the story (I launched just in time for Halloween, after all), but quickly ran into some problems. The worst of which was that the title all but disappeared when I viewed the image as a thumbnail – exactly as it would appear in many of the online listings! A similar problem occurred when the cover art and title were viewed in black & white such as on certain e-Readers (see  second example below).

I needed my cover to “pop” across as many viewing options as I could get, and so a change was in order. I found the answer in the yellow text you see below. It reminds me of my descriptions of the vicious yellow glow of the creature’s eyes in the desert gloom, and I like how it glares starkly from the cover regardless of what setting Amazon chooses to present it on. I think it looks fantastic on the glossy paperback cover as well – but holding a physical copy of one of your lifelong goals is a hell of an experience to begin with, so maybe I’m biased.

You’ll have to get one yourself and see.

So here’s my advice about covers, for any of you that read this far down the post and still care about my opinion

And most of all, have some damn fun! Enjoy the process and remember that you’re doing something that nearly everyone thinks they’d like to do someday, but that almost no one actually pulls the trigger on.
Until next time,
J.R. White
Facebook Youtube Goodreads Instagram

Howdy Folks! I know things have been pretty slow on here recently, and there’s a reason for that. We up and moved to Florida! After