The grizzled old sawyer looked down at the rough-cut slab at his feet. “Dang,” he muttered. “I didn’t want you to find that one.”

I had spent the morning at a private lumberyard secreted on an old homestead in the middle of Gainesville, Florida. The property was a riot of live-edge slabs and planks. The lumber was mostly cedar and cypress, stacked under the eaves and into the rooms of the old farmhouse. I had been crawling through the piles in the back rooms – my ears tuned for the menacing hum of wasps – as I looked for the perfect piece.

All of this started because my wife got me a damn cookbook.

Okay, there may be more to it than that. Basically, when we lived in the perpetual good weather of San Diego, my wife got me a grilling cookbook. The next thing I knew, she had cooked less than five times in as many weeks. And it just ballooned on me from there, and now I do pretty much all of our cooking – grilling or otherwise. But it turns out I’m pretty good at it.

Once we moved to Florida, I decided I wanted a nice outdoor kitchen. I already had the grill and a good prep table, but I really wanted a sink. And not just any sink – I wanted a live-edge wood slab countertop with a bar sink that I could hook up to a garden hose and drain into the yard. And a quick look at pricing on the internet made it clear I couldn’t afford one of these things unless I built it myself.

So that’s how I found myself covered in cobwebs and sawdust in the back of a repurposed farmhouse.

I needed a slab of a certain size in order for the sink to fit, and I wasn’t happy with the red and white streaked cypress planks I was finding. Then, in the far back of one room, buried under a pile of cedar, I found it. The slab was nearly five inches thick, and felt like a hundred pounds. It was perfect. I muscled it out of the building and went looking for the proprietor (who had long since abandoned me to my search).

I asked the sun-darkened old sawyer what kind of wood it was – I didn’t recognize it, and it obviously wasn’t cypress or cedar. He dug a rag out of his pocket and worried it in his calloused paws. “That is a chunk of seasoned pecan,” he grunted. “I got that from the biggest pecan tree I ever saw. Hurricane took her down a few years back and I got her on the clean up job. Where did you find that? I was hoping you wouldn’t.”

I told him where, as I stood there soaked in sweat and thinking he wouldn’t part with it. He nodded slowly. “What’s your plan for it?”

I explained my project.

“Alright,” he sighed. “You can take it for a hundred.” Based on what I had seen on the internet, this was a far cheaper price than I’d been expecting.

“Ya hauling it out yourself, though.”

I smiled slightly less. It was time to get to work. 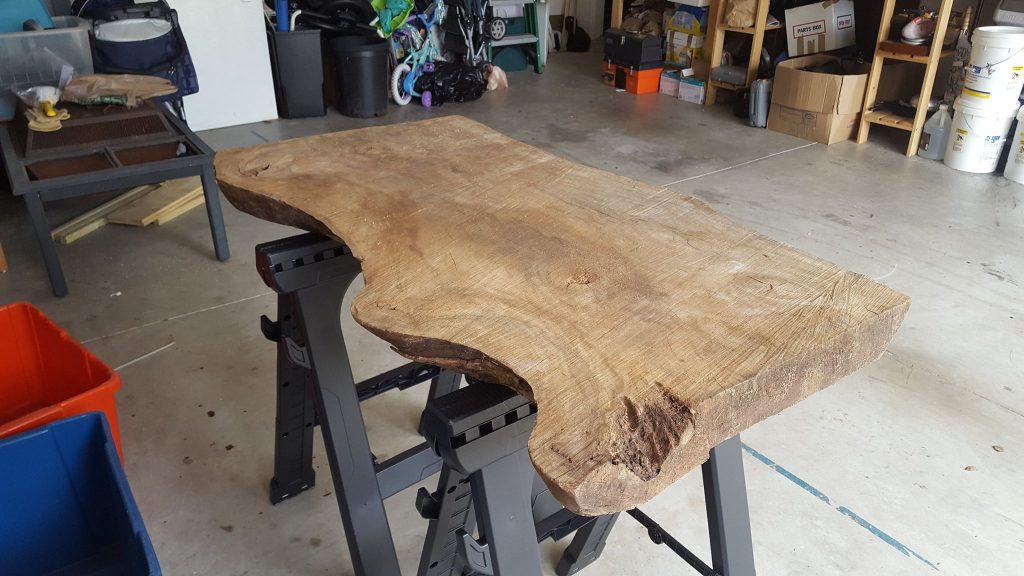 The slab was already rip-cut along the grain in nearly perfect dimensions. The first step was to cut a little off the back and sides in order to square it up. The surface was covered with deep kerf marks from the sawmill. I liked the rugged look of the marks, but would need to smooth them considerably before finishing.

I wasn’t getting out of this without some quality time behind a sheet of sandpaper. 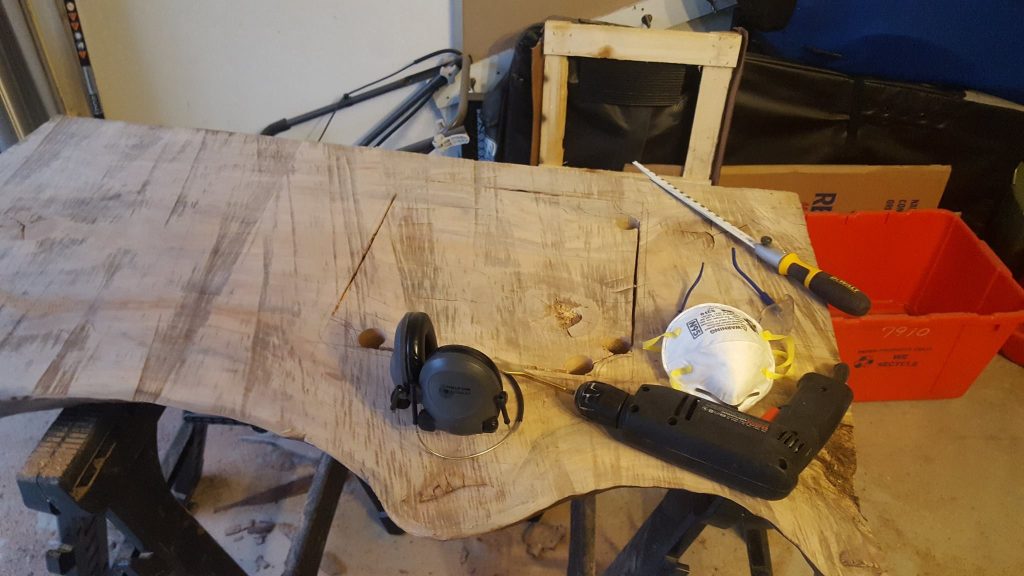 Before getting too deep into finishing the surface, I needed to cut the hole and mounting points for the bar sink. I ended up drilling corner holes to insert my saw and then cutting the opening by hand. If you’re looking for a great upper back and forearm workout, give that a try – but be prepared to spend some time… and profanity. 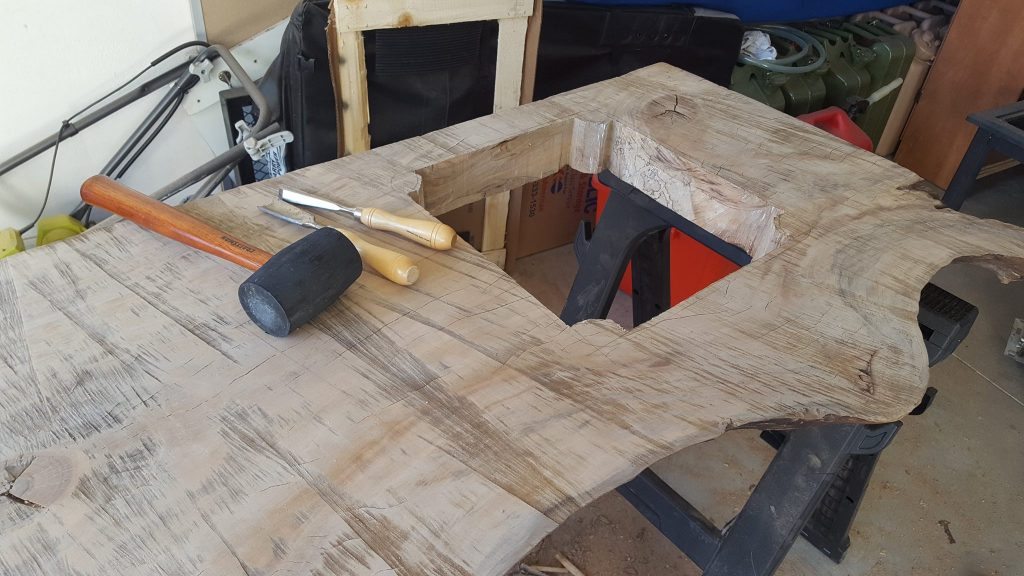 Once the hole was cut, I had to inlet the mounting points for the sink. You wouldn’t need to do this with a standard thickness countertop, but because I was using a five-inch slab, I had to adapt.

If you’re wondering what happened to the chunk of pecan I cut away, don’t worry; it did not go to waste. I used some of it for the Kuksa project, which I posted about earlier. 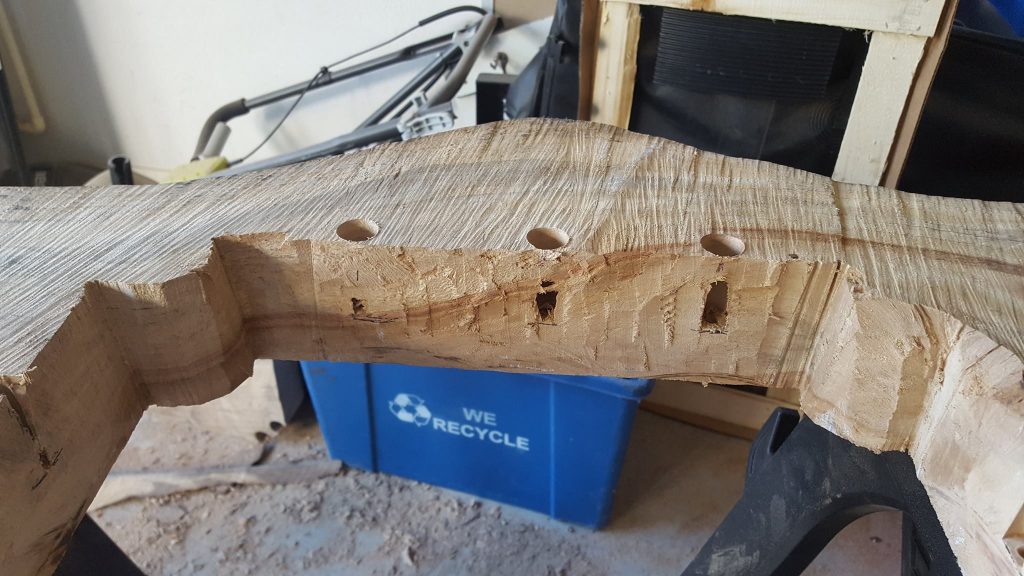 For the mounting points, I flipped the slab over and drilled holes to the appropriate thickness. 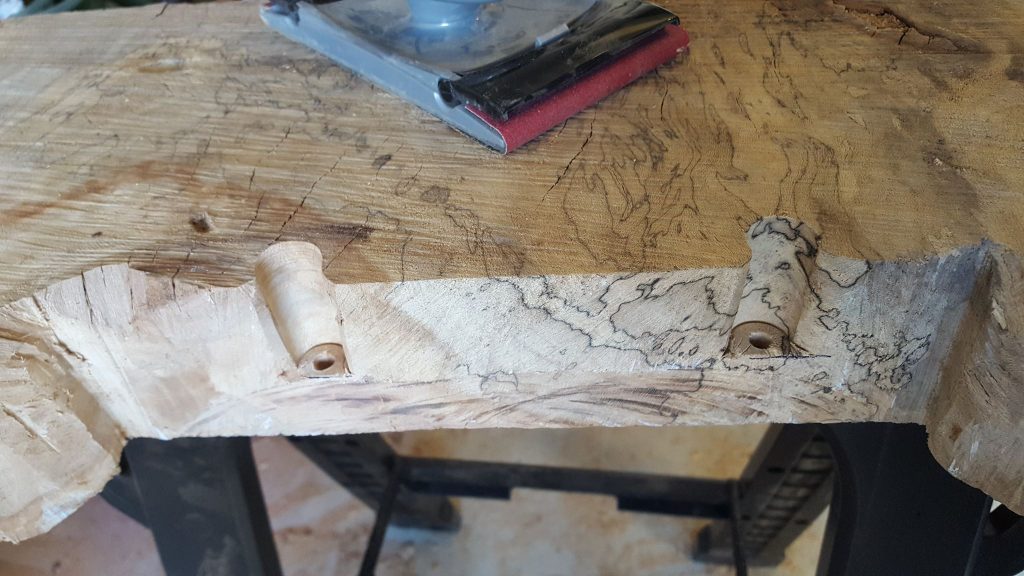 I then used hammer and chisel to finished the inletting. It kind of kills me that some of the most beautiful grain patterns in the entire slab would be hidden by the sink, but it couldn’t be helped. Luckily, that gorgeous spalted grain pattern would show up later in the wooden mug I carved from the remnants. 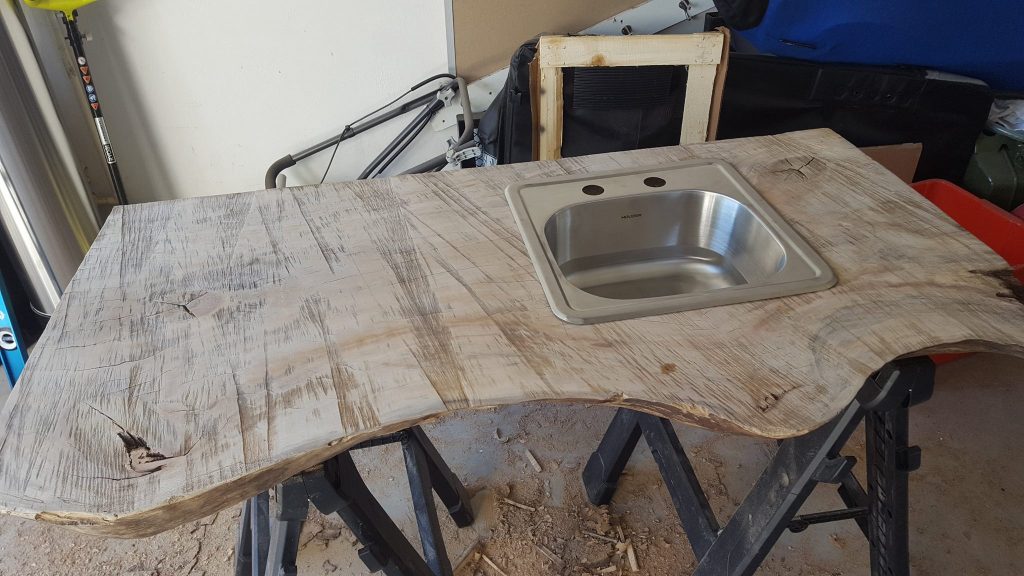 A quick test to make sure the sink would fit, and then it was on to the legs.

You can really see the thick kerf marks left by the ripsaw. The straight nature of the marks indicates a long straight sawblade, as opposed to the curved marks you’d see from a circular blade. 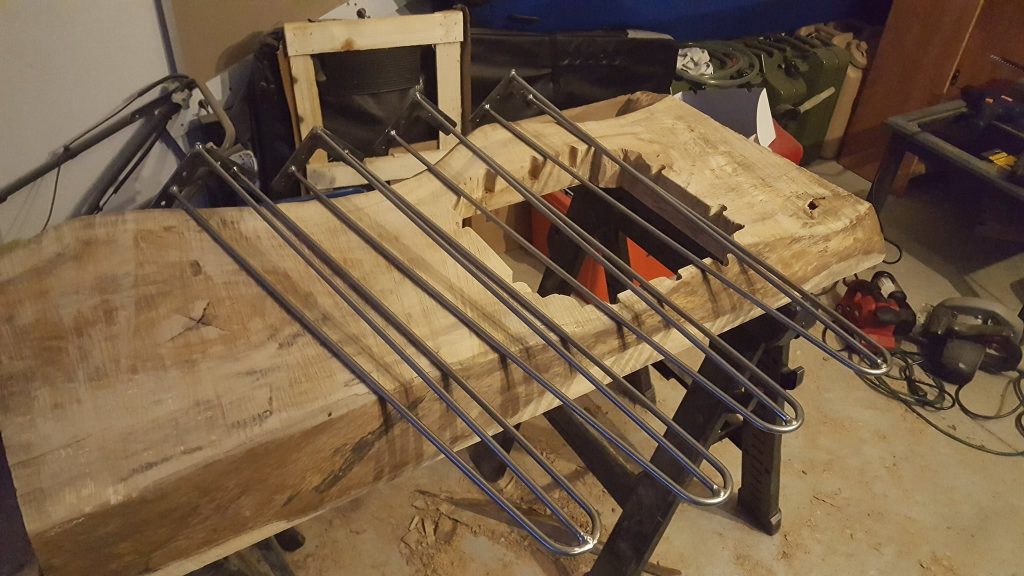 For the legs, I chose a set of handmade steel “hairpin” style legs from the internet. After degreasing, I painted these with exterior grade black paint and mounted them to the underside of the slab (shown above) using heavy lag screws. 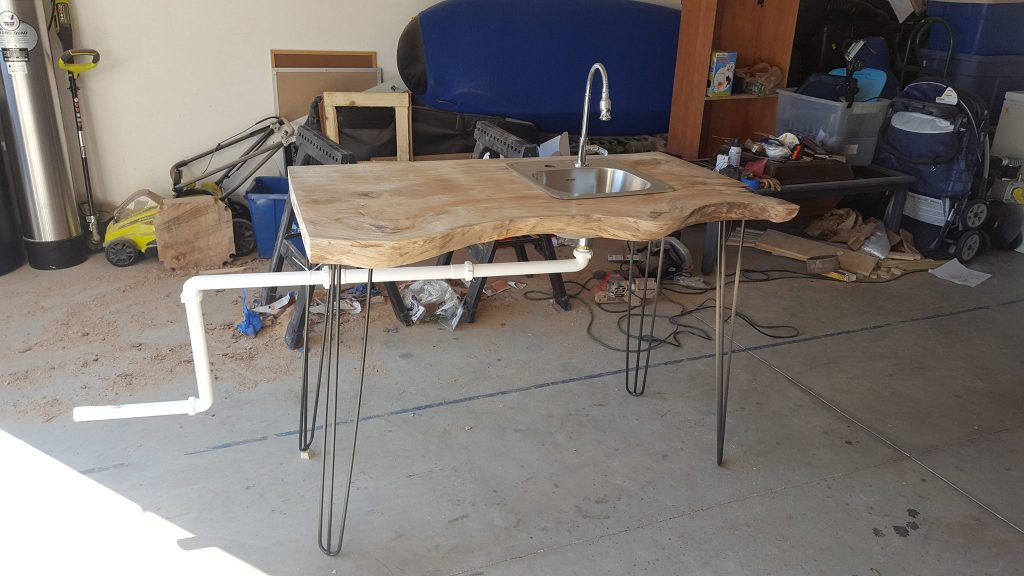 This was my first test-fit of the whole shebang (an underutilized technical term). The water source would be a simple hose hooked up to an outdoor spigot, and the drain would be directed off the edge of my patio into the grass. If you decide to use a setup like this, I recommend painting the drain pipe with something to protect it from UV breakdown, and make sure to use ‘outdoor’ soap at the sink to avoid killing your grass. I learned both those lessons the hard way.

I was extremely pleased with how it was turning out, but there was still plenty of finishing work to go. 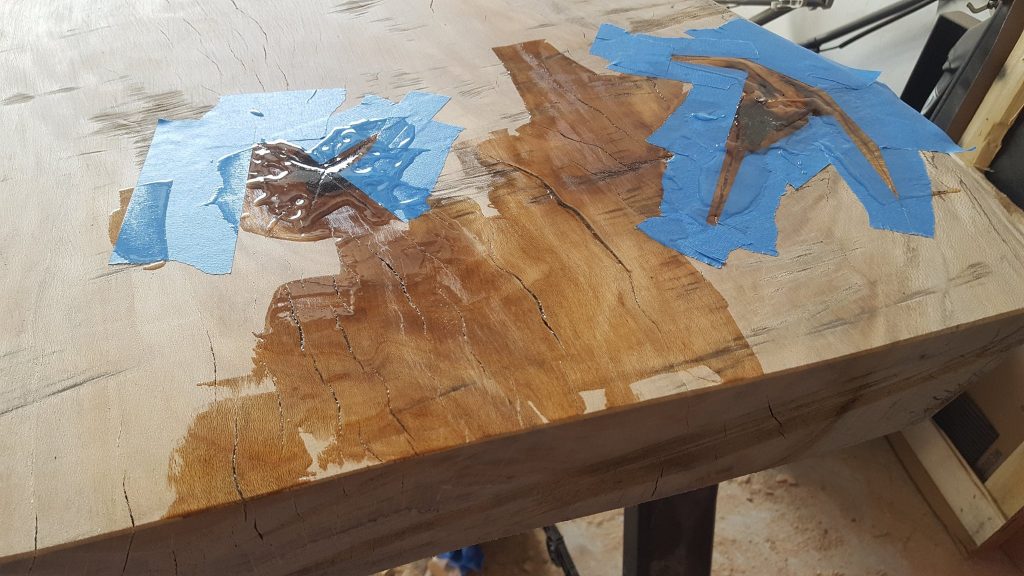 There were several knotholes and cracks in the slab that were too large to fill with the varnish I planned to use. The best answer I came up with was filling them in with a clear epoxy resin. 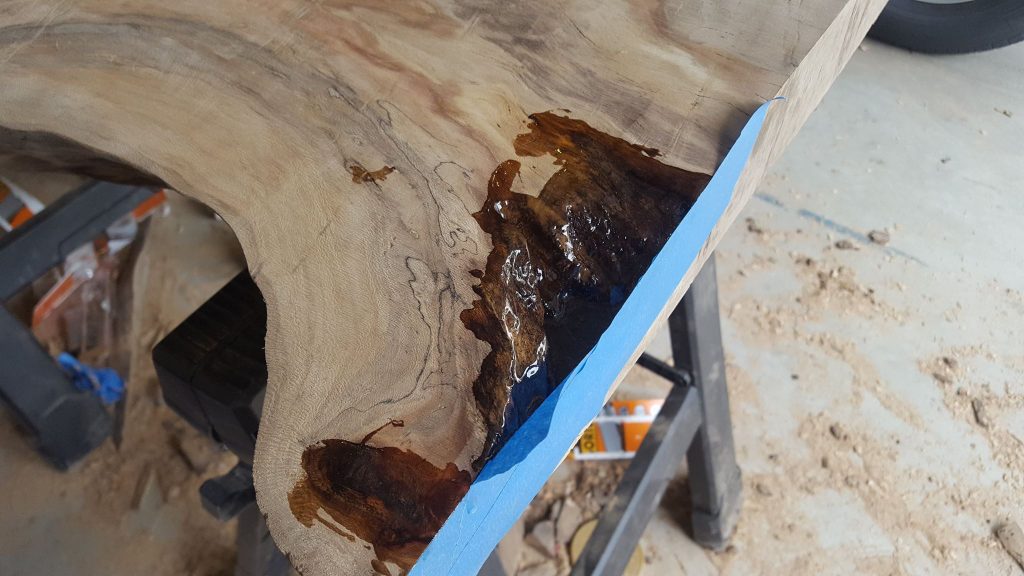 One of the knots was at the edge of the sink, so I had to tape off the edge to apply the epoxy. When this dried, it had a really cool organic curvature to it. 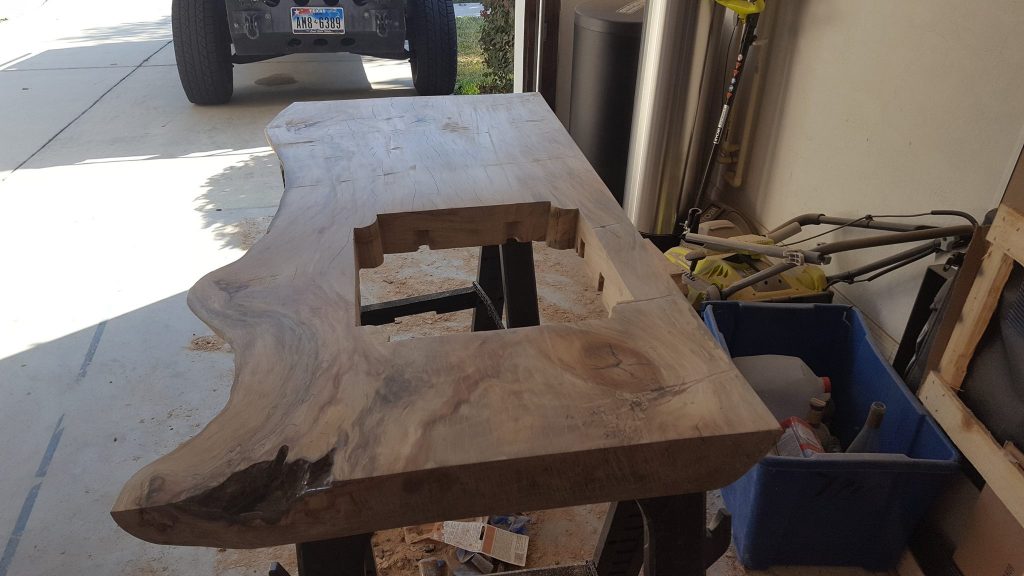 The next step was a ton of sanding. I started with a belt-sander and used increasingly fine grades of paper until finishing it by hand. Ultimately, I ended up whiskering the slab with 800grit paper. I’ve mentioned whiskering in other projects, but if you’re new here, whiskering is the practice of sanding wood as smooth as you can and then wiping it down with a wet rag. This raises the “whiskers” of the wood (fine grain ends), which you then sand off when they dry. I usually repeat that 3-4 times. You can see the stone-smooth slab still has some pretty obvious kerf marks to show off its rustic origins. 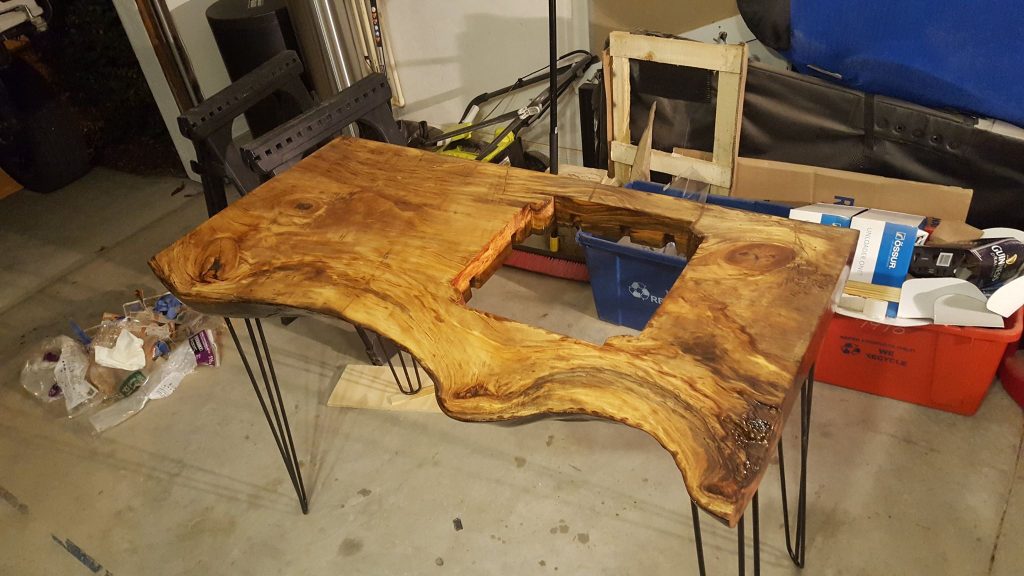 I finished the surface with two coats of thinned Spar Varnish (3 parts linseed oil, 1 part spar varnish) and another two coats of straight Spar Varnish. The pecan came out a beautiful golden color without using any stain. 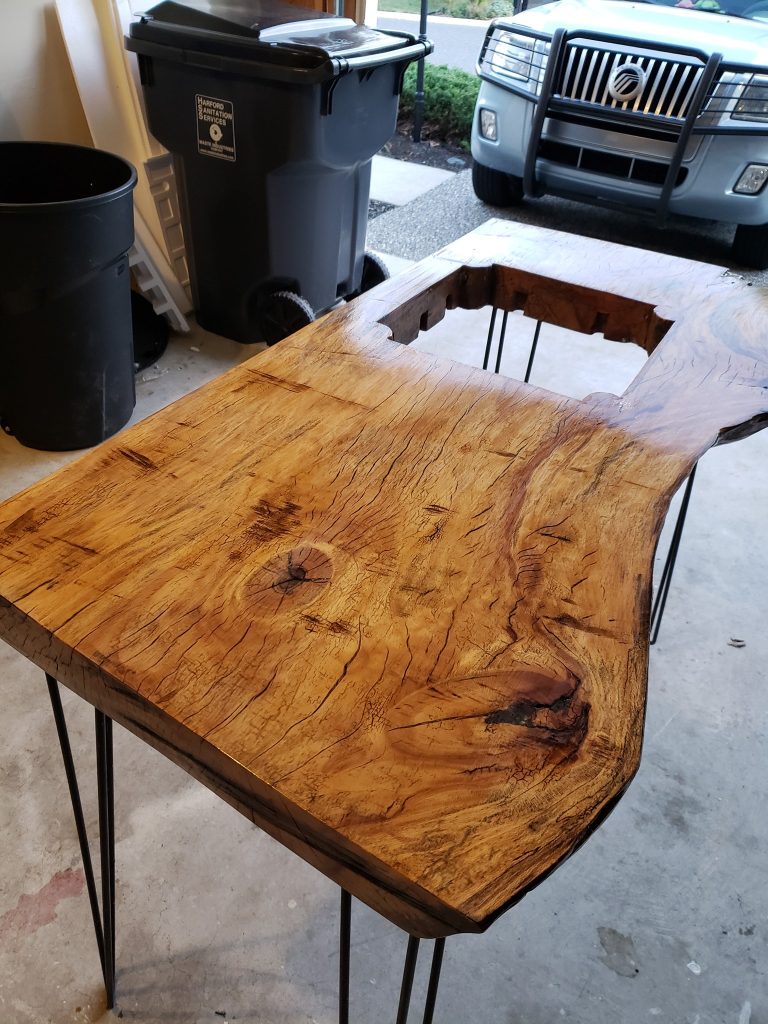 After three years in the Florida sun, the finish had begun to crack and haze, so I sanded the slab back down and refinished it. You can see how easy it is to restore wood slab. 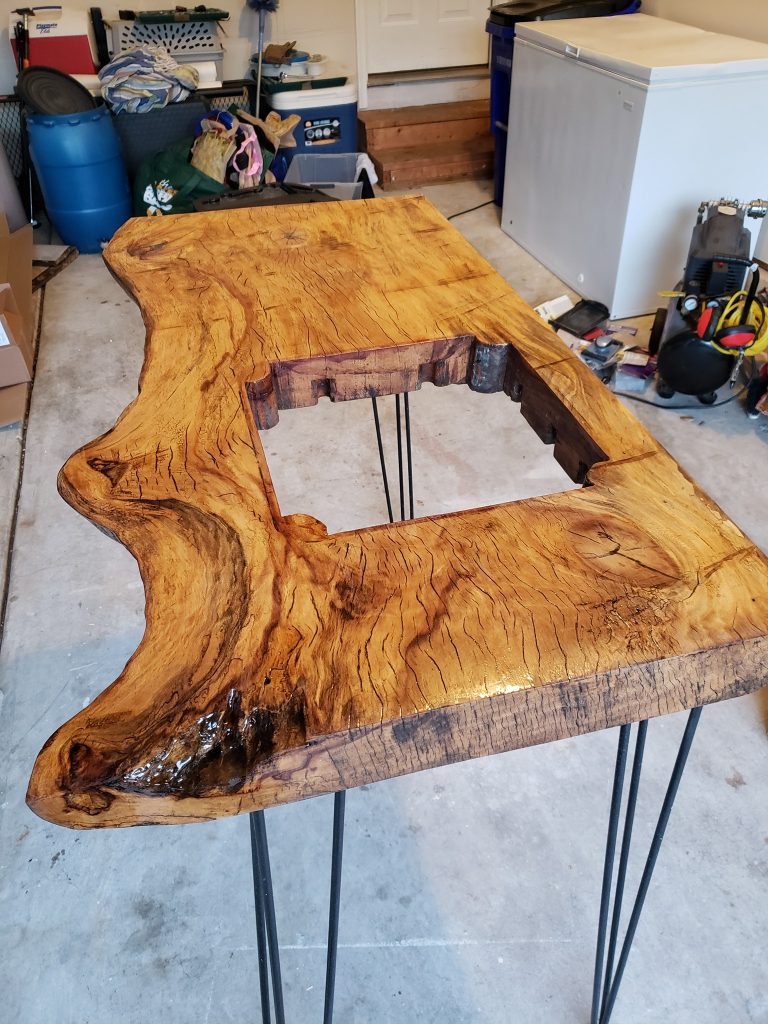 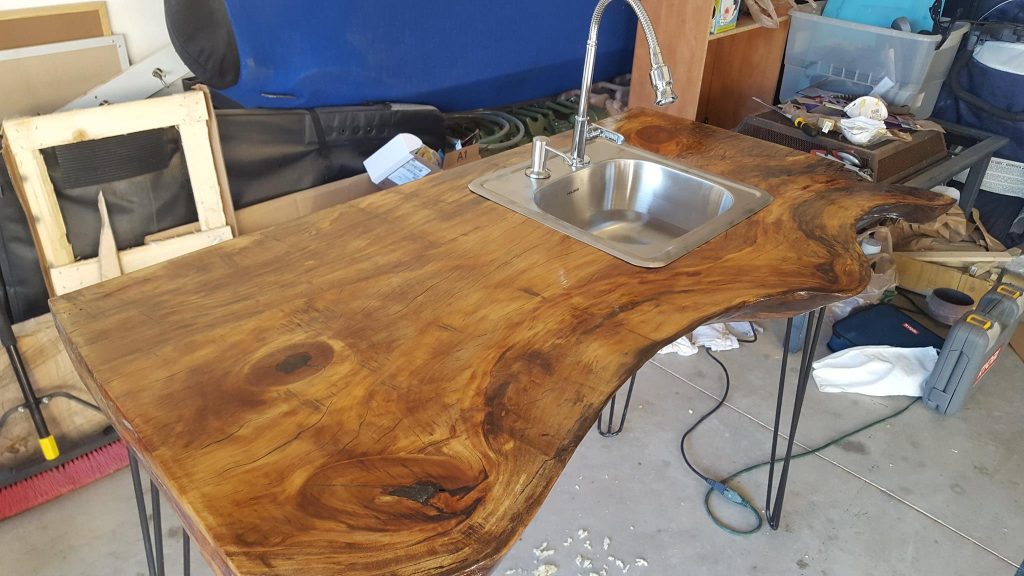 For the final fitting, I attached the legs to the varnished slab. I then caulked the sink into place and secured it from below with the channel bolts it came with.

All that remained was to muscle the behemoth out to the patio and (with the help of what Johnny Cash called an “A-dapter kit”) hook it up to the water source. 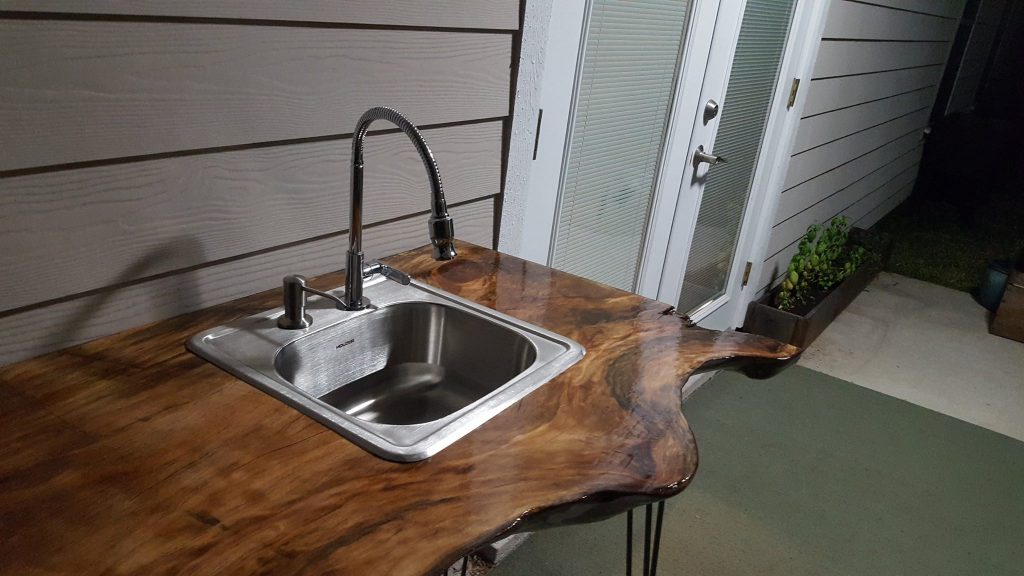 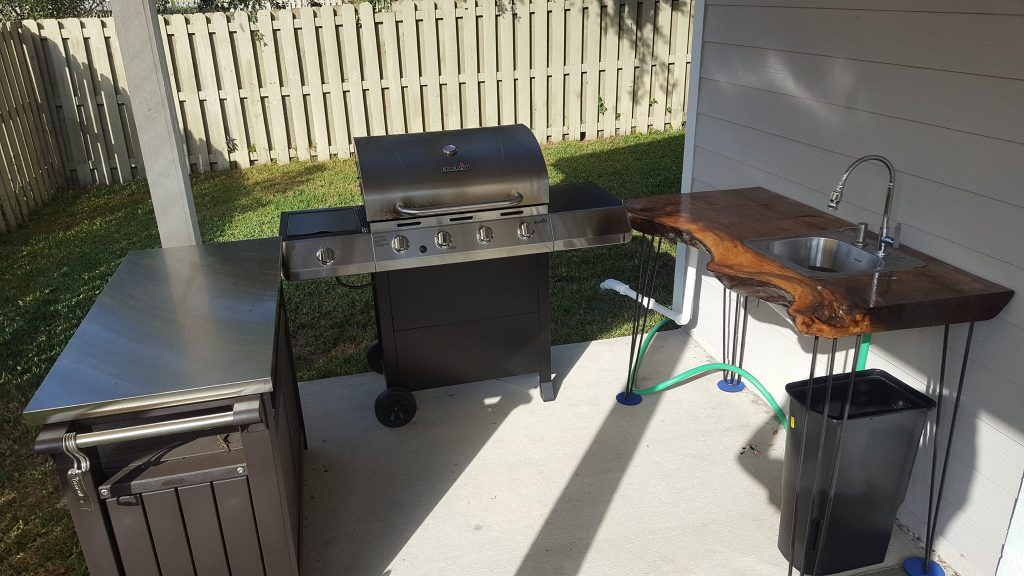 The live-edge sink project has been one of my favorites. I use and enjoy it whenever I cook outside, and it’s always special to have something you made yourself and are proud of.

I highly recommend creating things to anyone reading this, no matter what medium you choose. Yes, it won’t be “perfect.” Yes, you will have setbacks and learning curves. Yes, you might occasionally bite off more than you can chew. But none of that matters – it will be yours, and by your own hands, and that’s almost always worth pursuing, whether on a grand or small scale.

Creation is its own reward.