Few monsters are as iconic in the pop-culture of Halloween as the zombie. Whether we see them as a metaphor for the collapse of civilization, consumerism, the threat of mob violence, or just the inevitable specter of death slowly shuffling toward us all, the Living Dead have occupied an impressive swath of the horror movie landscape. One of the most imposing monoliths on that landscape is George Romero and his original trilogy. Night of the Living Dead, Dawn of the Dead, and Day of the Dead, each have their own merits and all have stood the test of time. I have absolutely nothing against them. But for today’s post, I’d like to highlight five zombie movies that I think  deserve to be pulled from the shadow of Romero to enjoy some time in the sun.

Here, in no particular order, are my five favorite zombie movies (that don’t involve George Romero).

Return of the Living Dead (1985, directed by Dan O’Bannon)

If you’ve ever done a zombie impression that involved moaning “BRAAAAIIIIINNNS” this movie is why. When an eager-to-impress worker at a medical supply shop opens a barrel of “military waste” the dead begin crawling from their graves, hungry for the brains of the living. Breaking many traditions of previous zombie lore, the creatures in Return of the Living Dead are a whole new animal, vocal, emotional and vividly fleshed out by great practical effects. One of the best examples is the iconic Tar Man pictured below. With a bright pallet and a tongue-in-cheek sensibility, Return of the Living Dead still feels fresh and fun today

Re-Animator (1985, directed by Stuart Gordon) Based on a short story serial by H.P. Lovecraft, Re-Animator introduces the modern-day Frankenstein of Herbert West. Played with barely restrained psychosis by Jeffrey Combs, West pursues his illicit studies in raising the dead using a reagent of his own invention. The results are horrifying, grotesque… and irreverently entertaining. Throw in a dose of young love, academic jealousy and a lecherous severed head, and it turns into one helluva fun ride.

Dead Snow (2009, directed by Tommy Wirkola) A group of young Norwegian friends on holiday accidentally uncover a box of cursed loot that summons an army of zombified Nazis. Hilarity ensues… as does a rather impressive array of carnage. This is the kind of movie where a dude can mount a machine gun to his snowmobile and it all makes perfect sense.

Released as Braindead outside the U.S., this movie is absolutely bonkers. What kind of zombie movie does the famed director of The Lord of the Rings and King Kong make? The kind in which a hen-pecked Momma’s boy decides the best way to deal with a horde of flesh-eating zombies involves strapping a running lawnmower to his chest. This whole thing is undiluted insanity. A kung-fu fighting priest, a baby zombie on holiday in the local park, the infamous Sumatran rat-monkey… it’s just one long parade of ever-increasing lunacy. This one of the goriest films ever made, but the effect is so outlandishly slapstick that you’re more likely to cackle than vomit. Perhaps you read all that and think “Jeez. Is this a recommendation or a warning?” and the truth is… I’m not sure. The only way to be know is to watch it yourself. Maybe you’ll be entertained, maybe you’ll be horrified, but you certainly won’t be bored.

Shaun of the Dead (2004, directed by Edgar Wright)

The first movie in Edgar Wright’s Three Flavors Cornetto Trilogy (which includes the absolutely hilarious buddy cop send-up Hot Fuzz) sees funny men Simon Pegg and Nick Frost confronted with the living dead. Released in the same year as the fast-zombie Dawn of the Dead remake, it’s a perfect antidote to the grim self-seriousness of that film. (And it also features Dylan Moran, star of the excellent but short-lived show Black Books, which you should all check out.) Shawn of the Dead is fun from start to finish, and helped pave the way for a slew of great horror-comedies that came after. It just goes to show that sometimes the best plan is to rescue your girlfriend, go to the Winchester, have a nice cold pint, and wait for all of this to blow over. 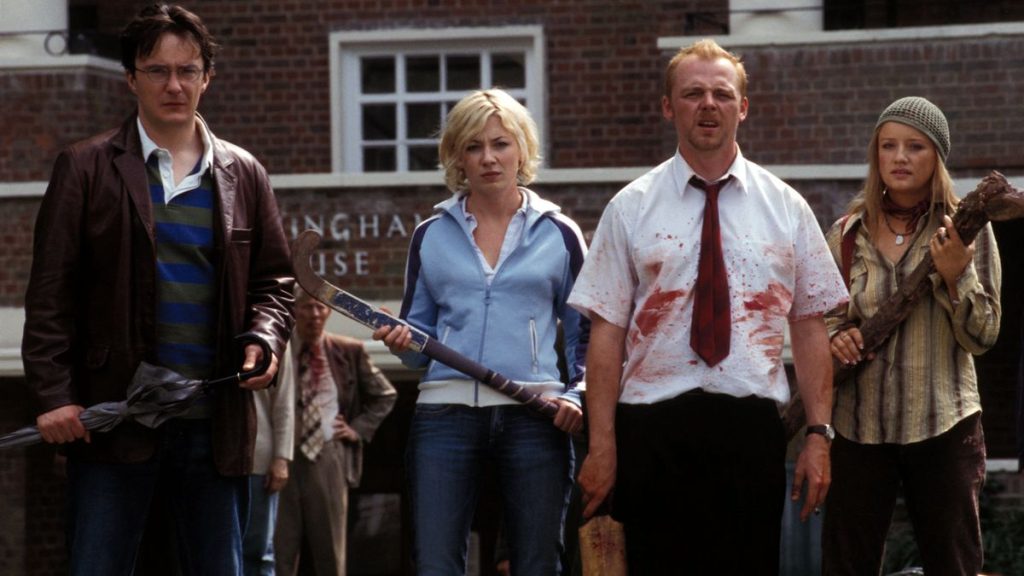 A pair of washed-up professional wrestlers find themselves trapped in an arena full of infected maniacs with nothing to defend themselves but witty banter and a pair of magical Mexican wrestling masks. Alright, full disclosure – Mike Carey, one of the lead actors on this one, is my wife’s cousin, so it was on my radar well before most folks had heard of it. Directed by Max Martini (actor in Pacific Rim, The Unit, and Spectral), what makes this film so cool to me is that Carey and fellow star/writer Chris Margetis are legitimate buddies and it shows. Who among us hasn’t wanted to get the gang together and make our own horror movie? The movie’s strongest point is the snappy ball-busting dialogue. The funniest exchanges are often between Margetis’s cynical Stone Manson and Carey’s lovable, malapropism-prone goon Skull. It ain’t Citizen Kane, but it’s still a good time. (And if you’re looking for Citizen Kane, you’ve definitely wandered onto the wrong movie list.)

Juan of the Dead (2010, directed by Alejandro Brugués) A Spanish-language anti-communist zombie comedy set in Cuba. That’s it… that’s the hook. If you’re one of those folks who misses the days when subversive political commentary was a mandatory part of zombie movies, this one’s for you.

Fido (2006, directed by Andrew Currie) This is really just a simple story about a boy and his dog. Except the dog is a zombie played by Billy Connolly. Funny and oddly sweet in a way a movie about the living dead can seldom be.

That’s all for now, Folks! I’m hoping to crank out a couple more posts before Halloween, and then I have to get back to work on the next Kit Barker novel. (Check out the series on Amazon!)

Don’t forget to check out the posts on my favorite werewolf movies, and great classic horror short stories before the trick-or-treaters get here.