I recently bought a used canoe, which is a whole adventure in itself that I’ll tell you about later, and the seller threw a couple gnarly old paddles into the bargain.

As you can tell from the pictures below, these things were in rough shape, but I still wanted to see what I could do with one. 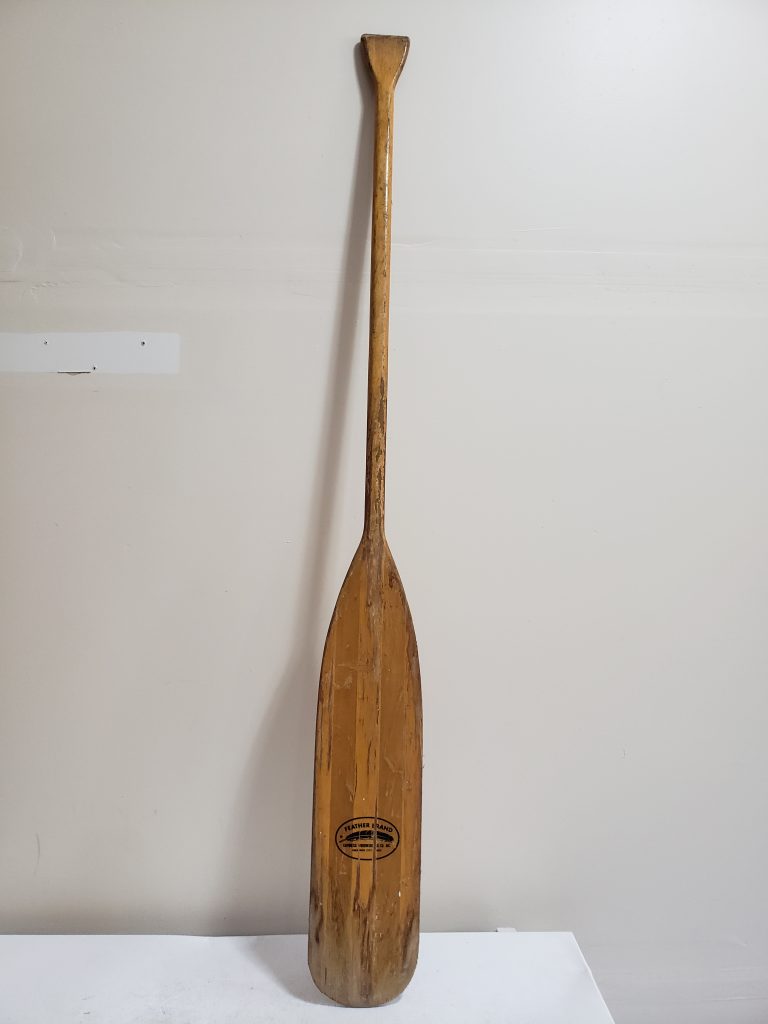 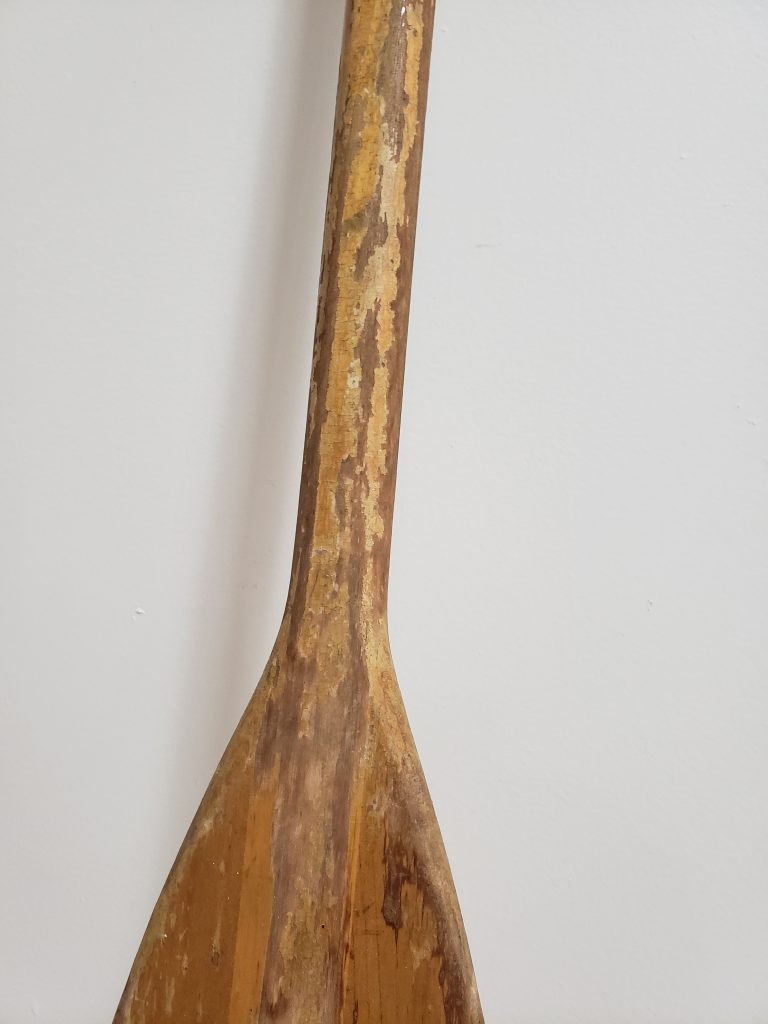 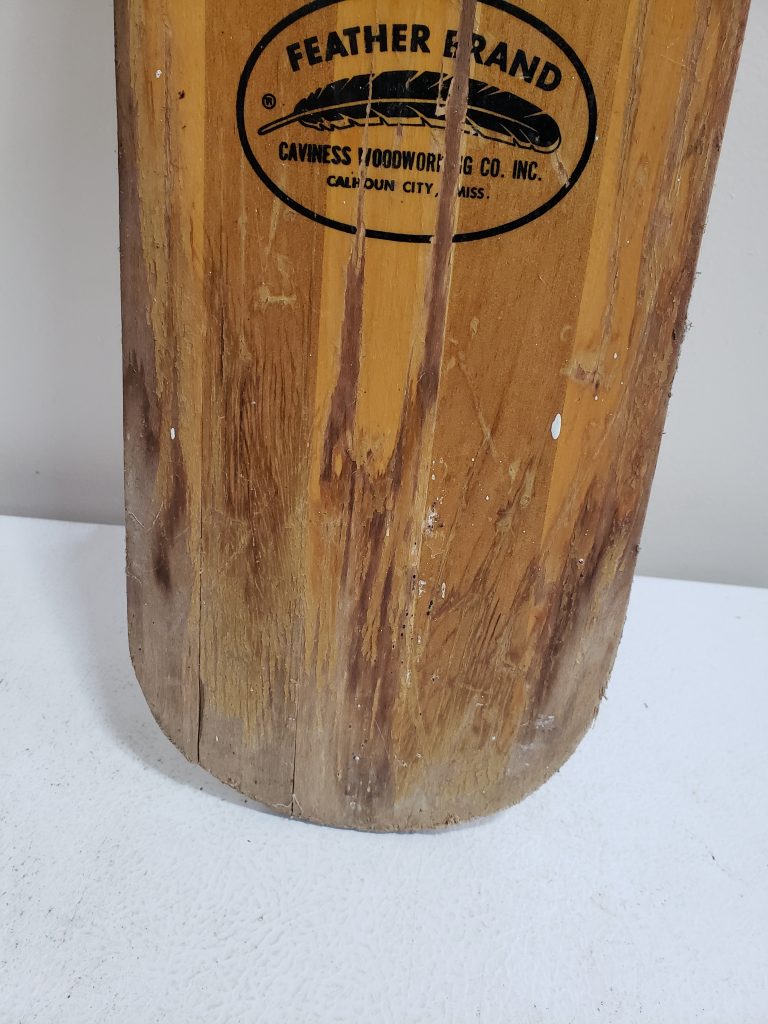 I knew I wanted a different look from the paddle, so I decided to reshape it into an “otter-tail” profile. The otter-tail paddle is reputed to be a less tiring style of paddle for long days on flat water, which is exactly the type of canoeing I enjoy. I started by marking out a centerline and measuring out the material to remove. After that, it was time for the jigsaw and belt-sander. 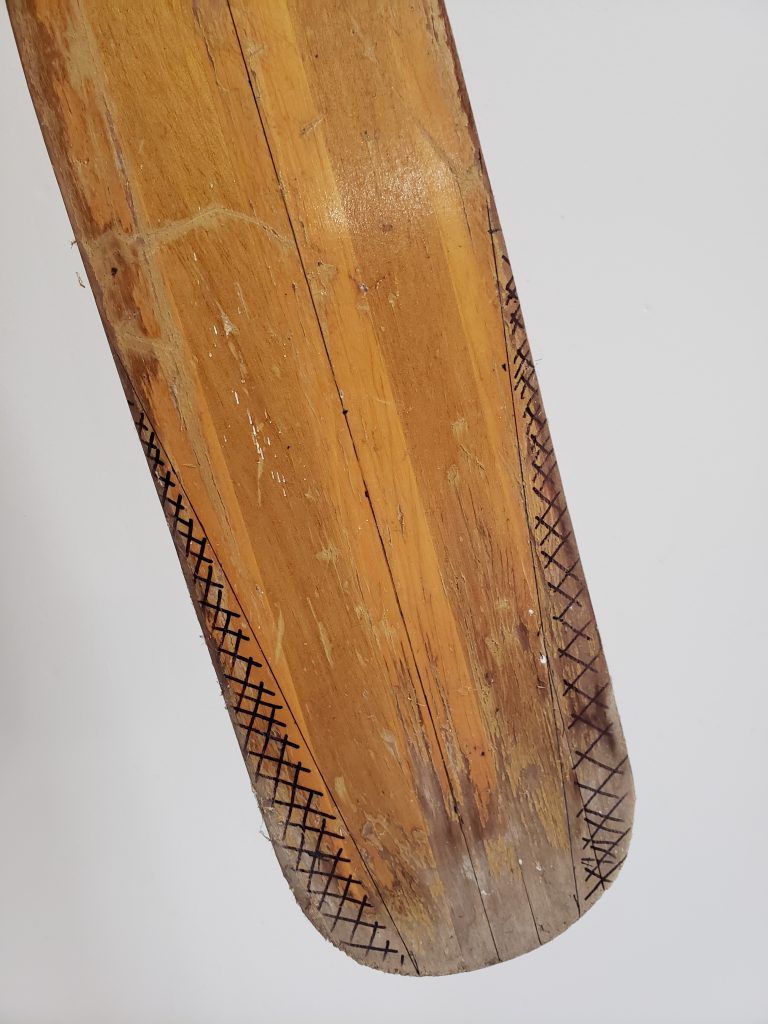 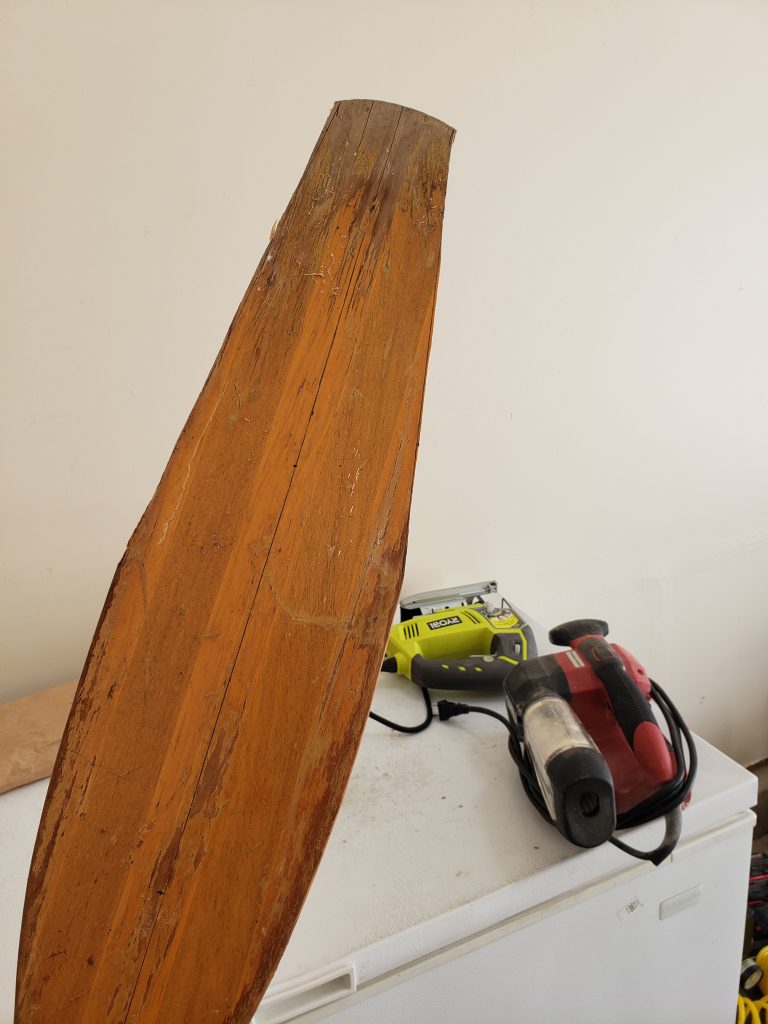 Yeah, that’s… that’s some precision work, right there… moving on. 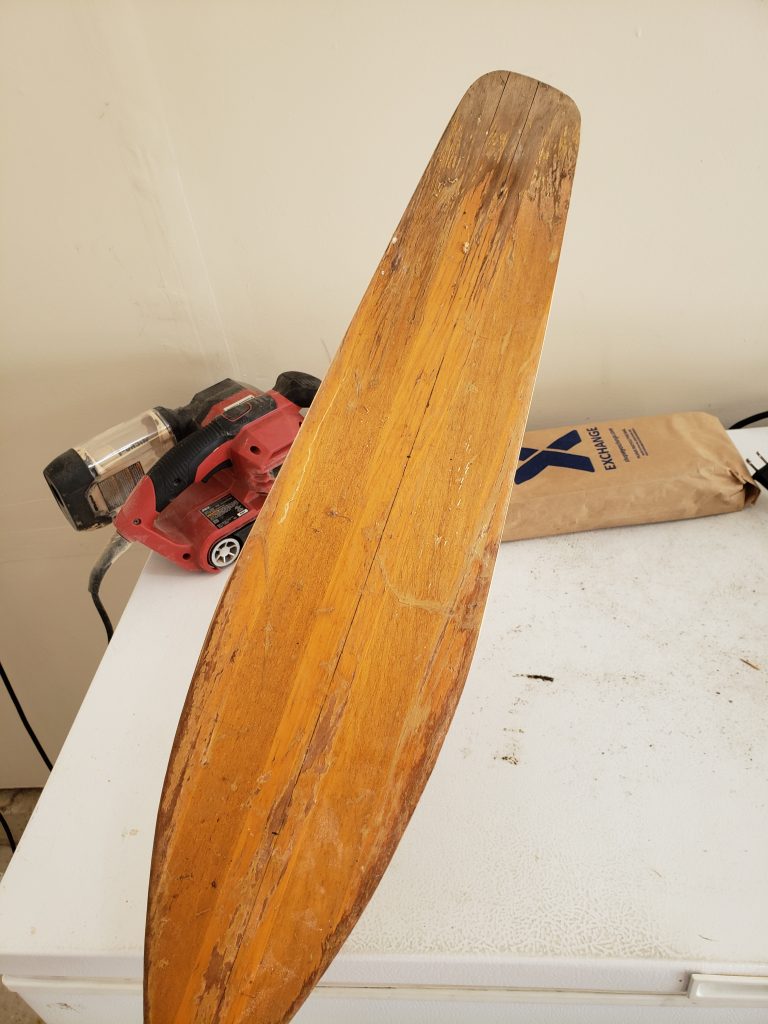 After shaping the new profile, I started sanding off the old varnish. I’ll spare you pics of every step along the way, but rest assured it was much, much… much more time consuming than expected. When the alternating colors in the wood started coming through, it was a huge relief. 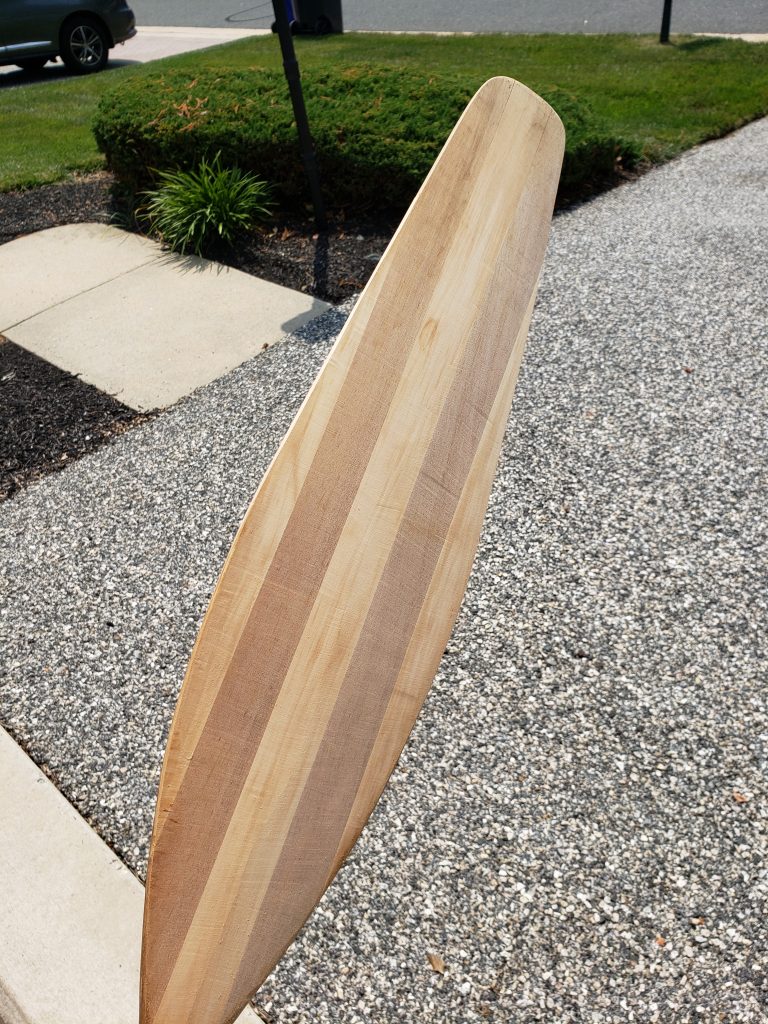 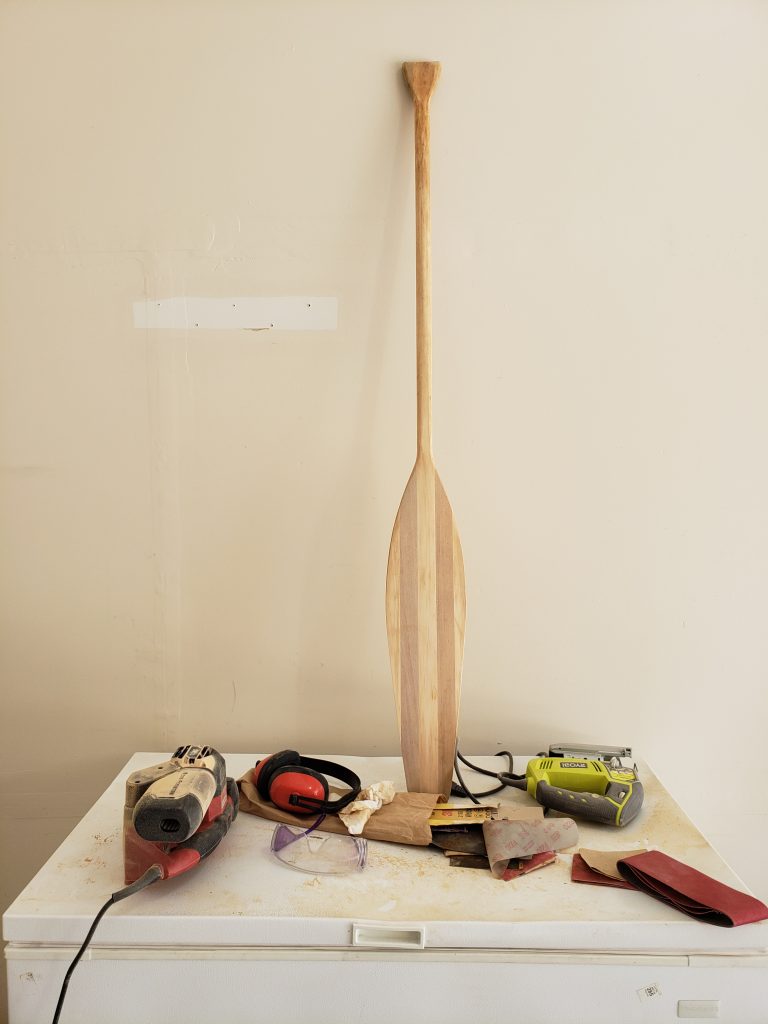 After sanding, there were still a couple splits in the wood that I needed to deal with, so I mixed up some epoxy and filled them in. After the epoxy was fully cured, I shaved off the excess with an exacto-knife and sanded it flush. 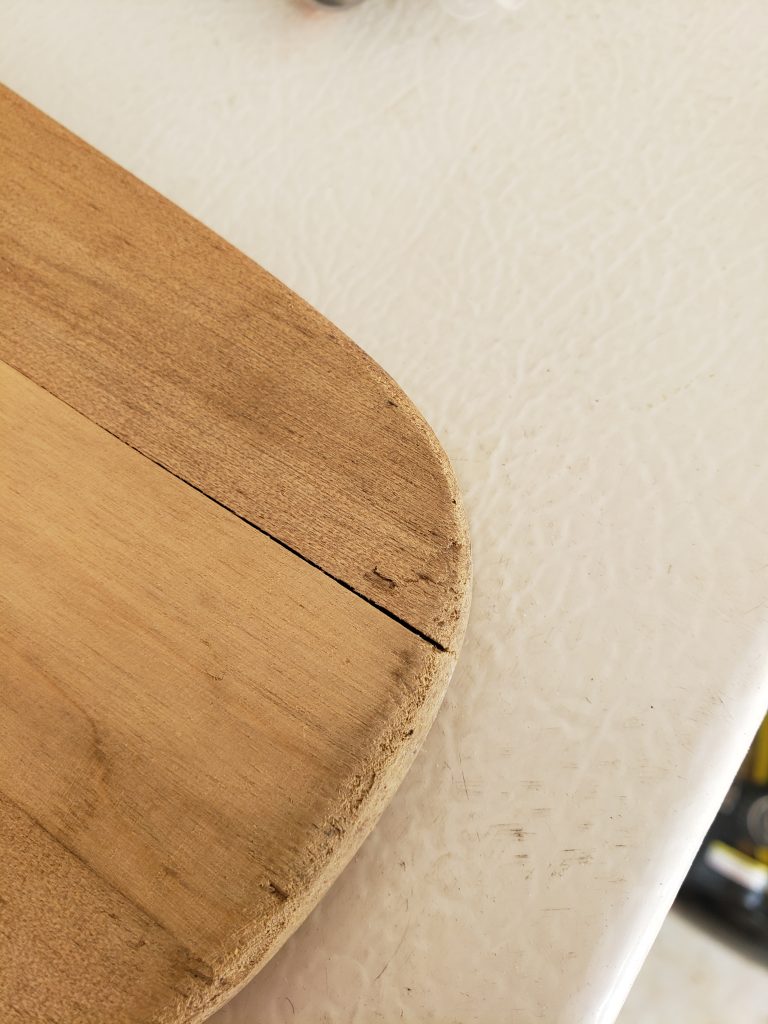 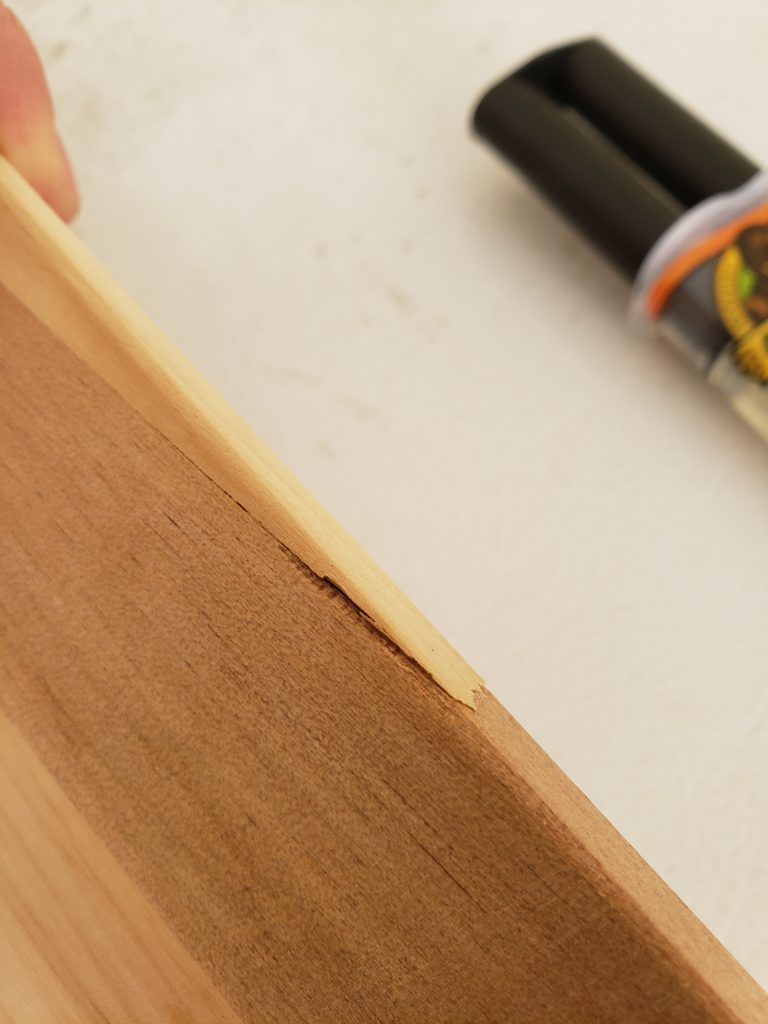 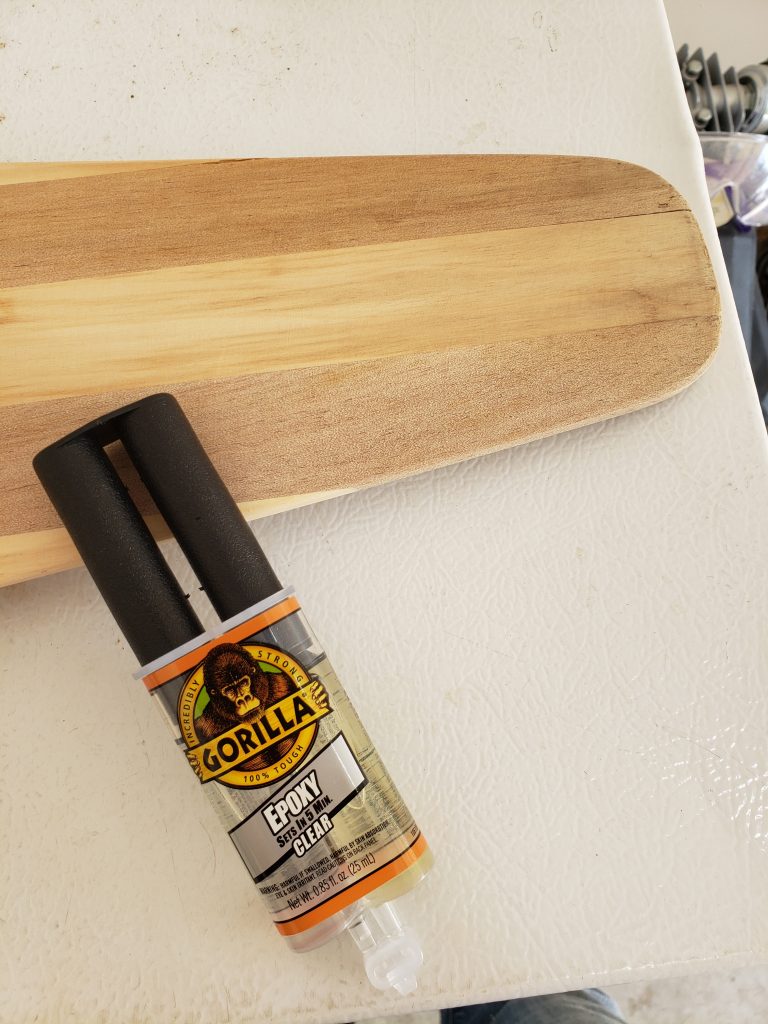 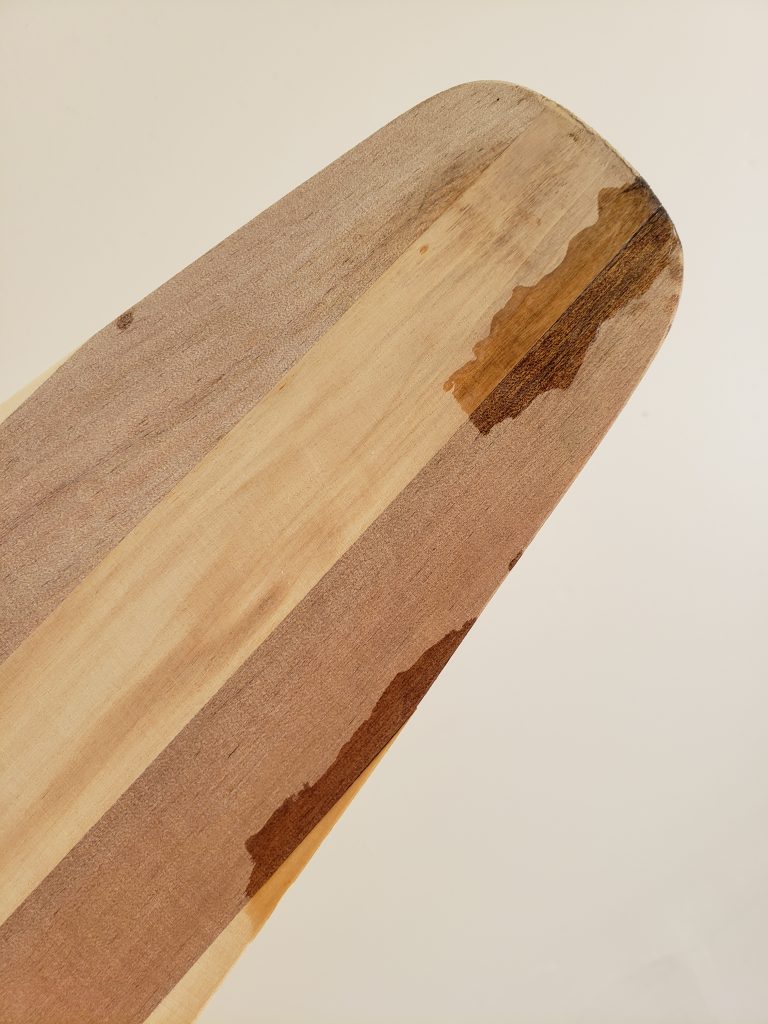 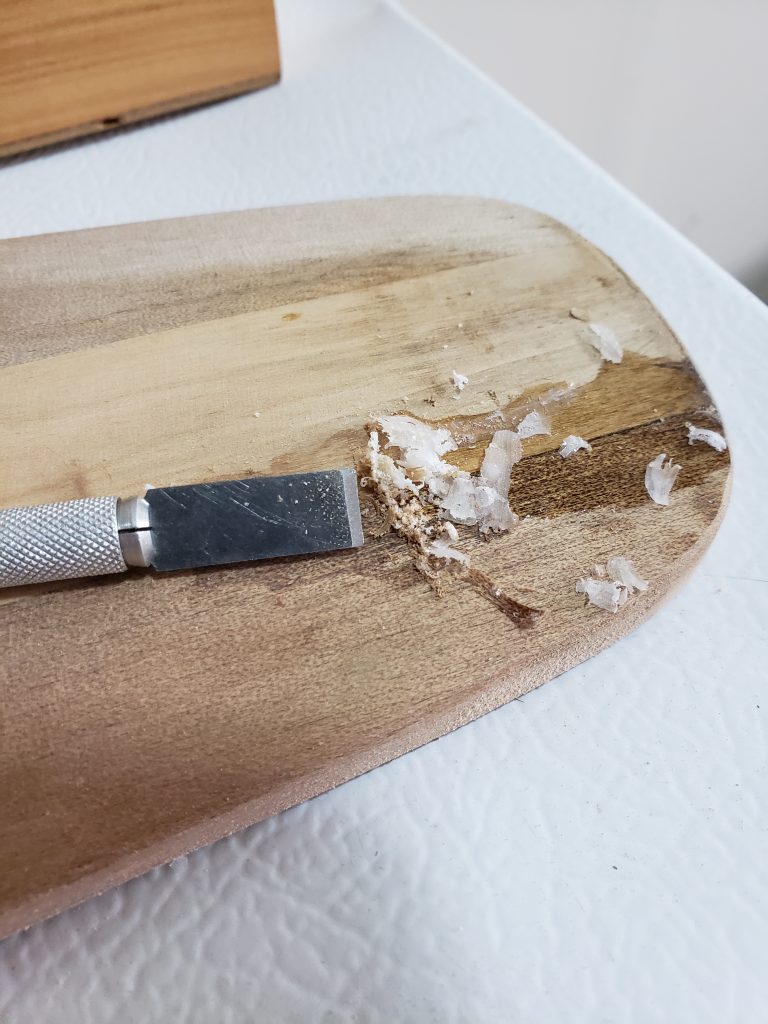 Now, I’m a fiction writer, which means I’m generally incapable of doing things without some degree of embellishment. So, I found a cool graphic of a river otter online, printed it out, and used the exacto-knife to cut out a template for the paddle blade. I used an oil-based paint marker to stencil out the image. The paint did bleed along the grain a bit, which I probably could’ve avoided by putting down a light coat of varnish first. My wife says it looks cool, though, so I’m not worried about it. 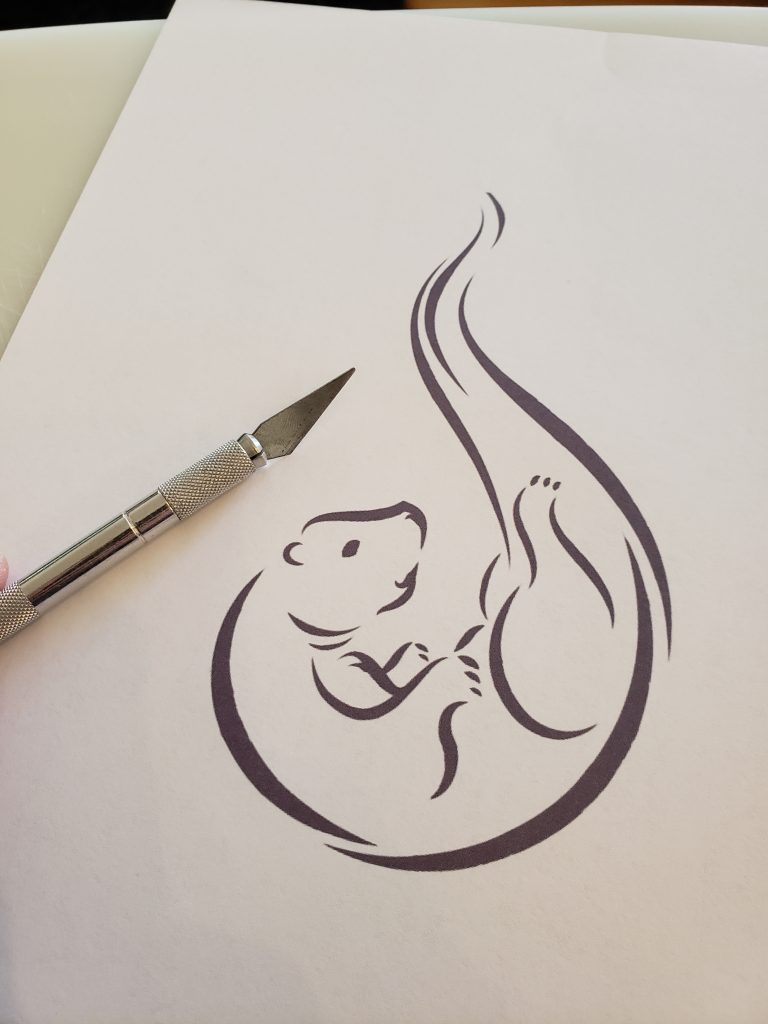 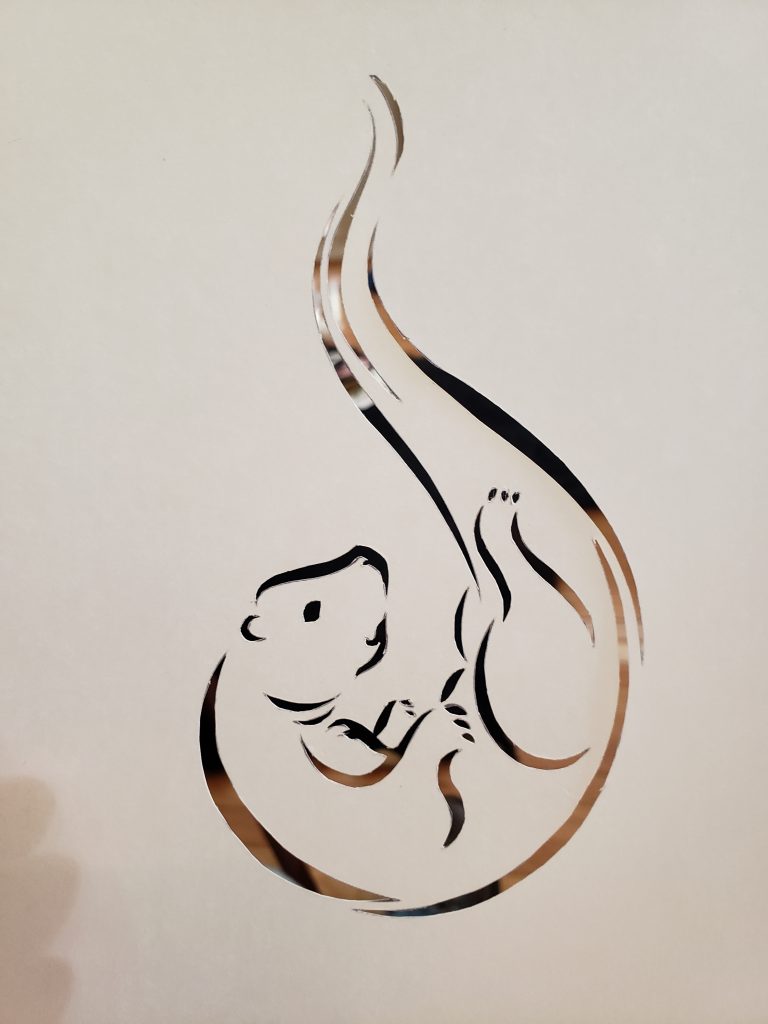 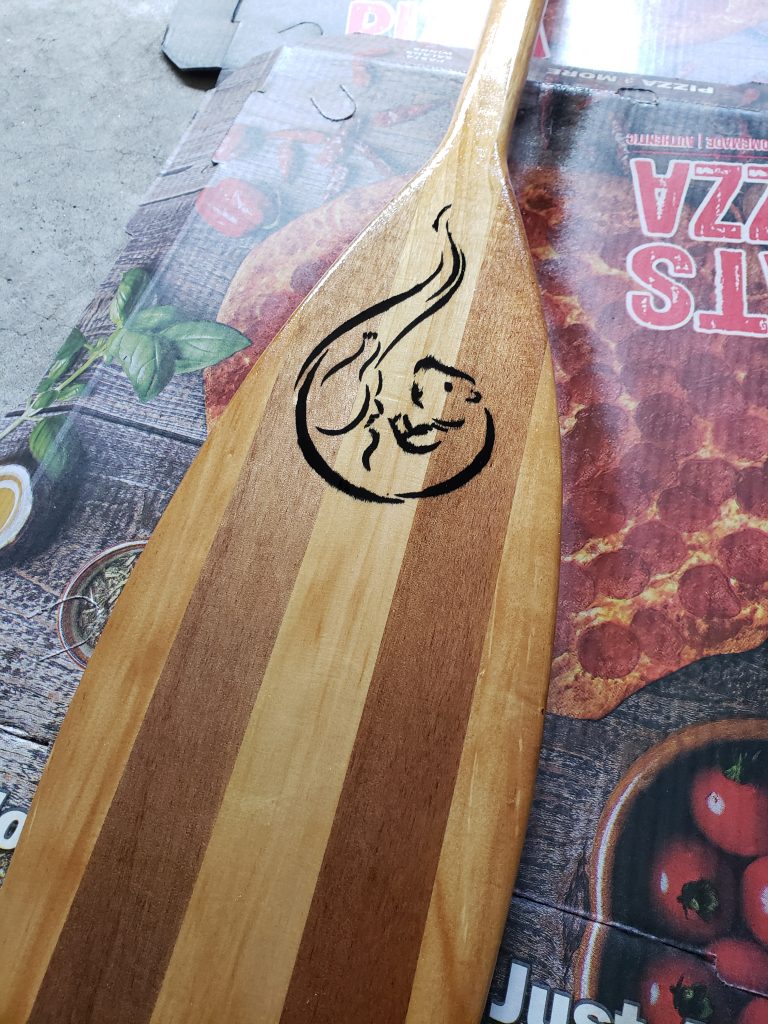 Three coats of spar-varnish later (included a lightly sanded one before the final coat) and I was ready for a final embellishment. Using 550 cord, I wrapped the shaft of the paddle with a spiral hitch and Turks-head knots. The wrap will protect the shaft from rubbing on the gunnel when I use prying strokes, and it gives me access to nearly twenty feet of cord if I need it.

Mostly though, it’s just there to look cool. 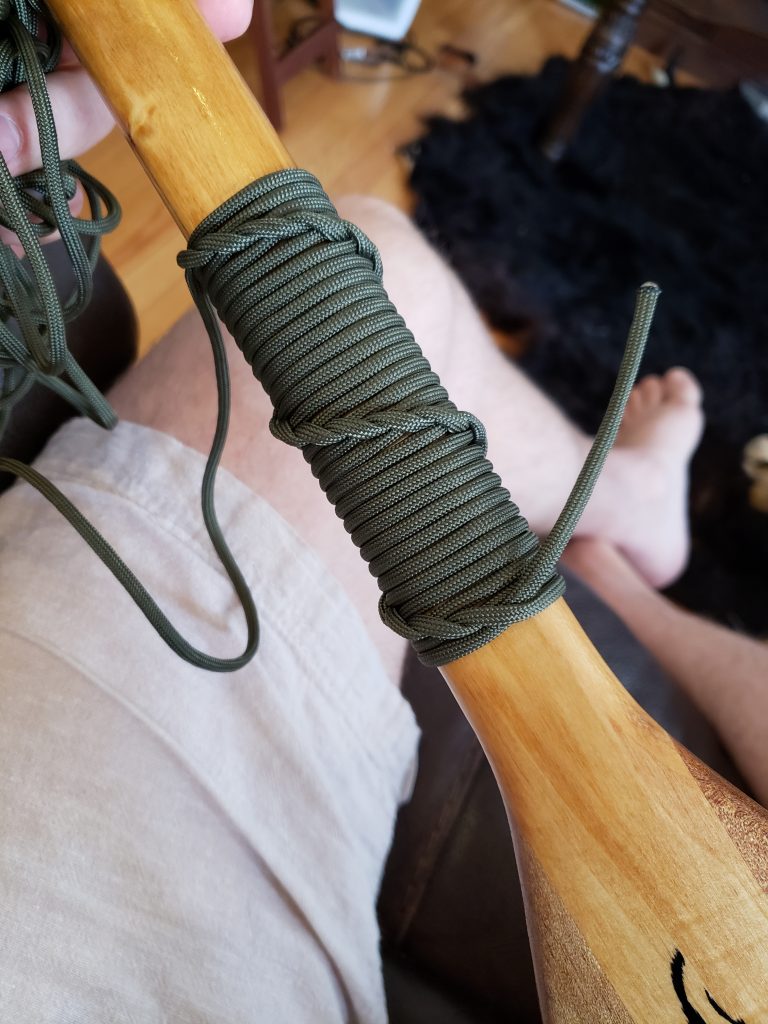 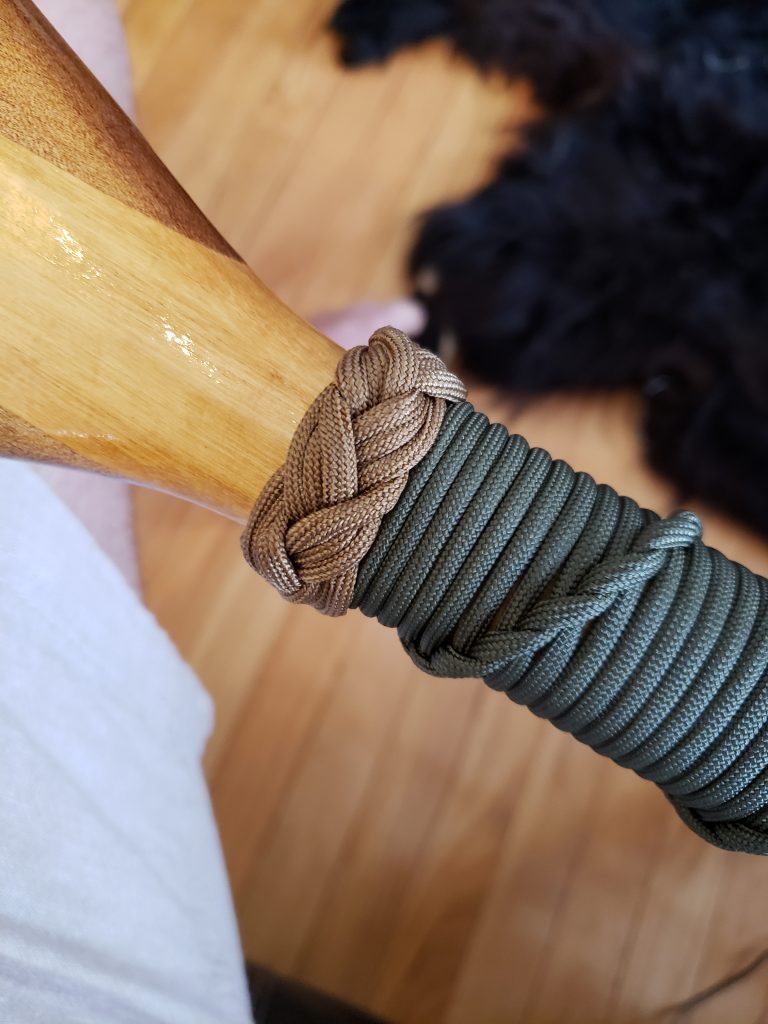 Behold the finished product. Not bad for a nasty old freebie, huh? I can’t wait to take it out on the river (unless my wife manages to steal it. She’s been making some shifty overtures, folks). 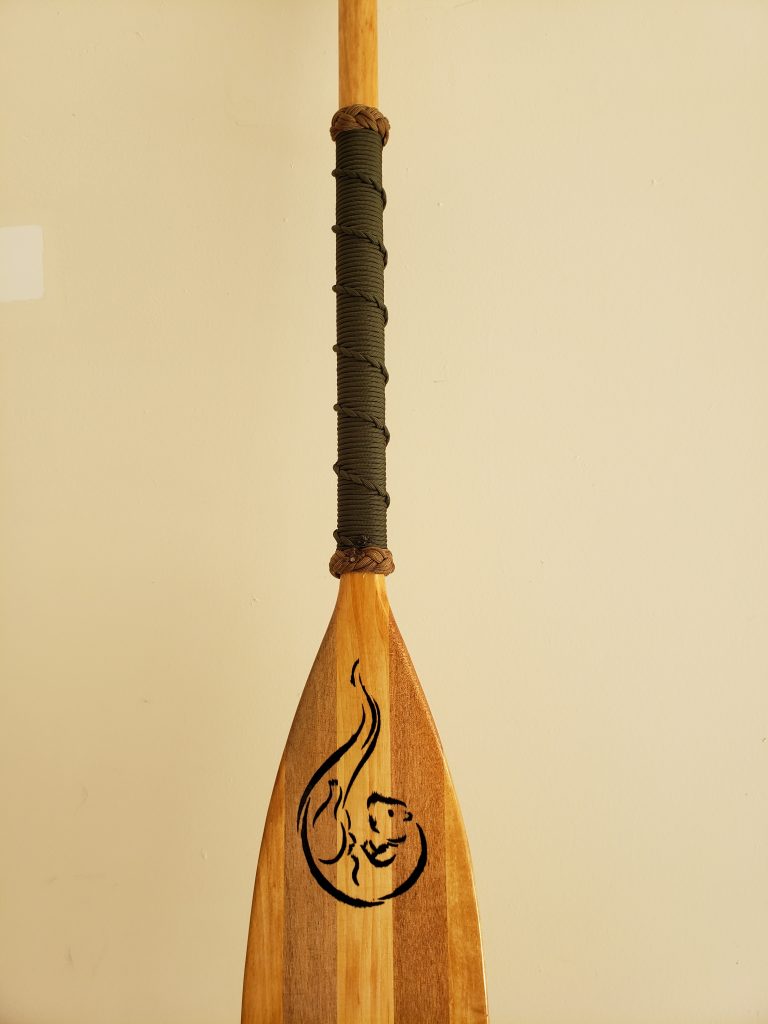 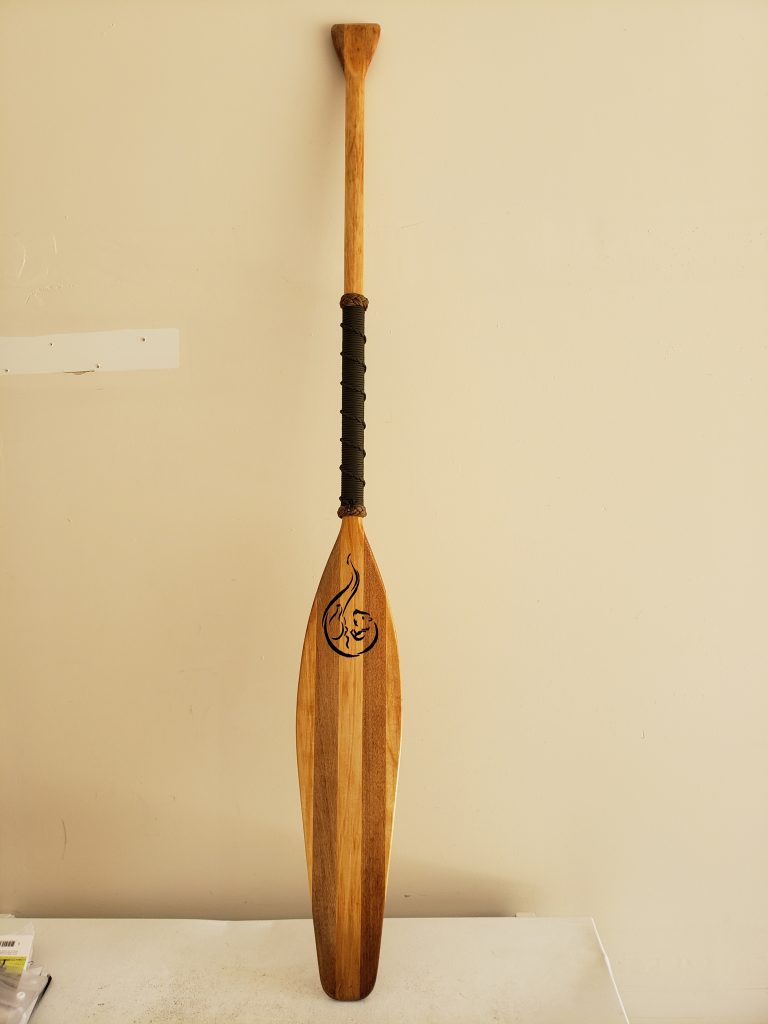 I’m very happy with how this project turned out. It’s a great reminder that just because something is old and beat up doesn’t mean it doesn’t still have something to offer in the right hands.